08 Jun 2005 Written by Jim
Traffic information collection and broadcasting were on the agenda at a meeting of the EC-supported, ERTICO-coordinated DYNASTY (Demonstrating a Platform for Dynamic Traffic Information services for the City of Beijing) project held in the Chinese capital in April 2005. Key European ITS industry leaders took advantage of the opportunity to meet and network with the Chinese companies and authorities that attended.

ERTICO organised the event in cooperation with the Beijing Municipal Committee of Communication (BMCC). Co-financing came from the EC Asia IT&C programme.

All those involved hailed the workshop as a significant step forward towards the introduction of new methods for traffic data collection and in-vehicle dynamic navigation in China through TMC. 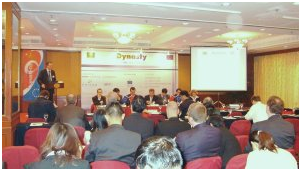 The following morning featured a DYNASTY consortium meeting. This focused on the preparations being made by each of the specialised working groups defined by DYNASTY, including those on location tables, broadcasting, traffic data collection, maps and HMI.

The meeting achieved significant advances in defining broadcast requirements and an architecture for implementation in Beijing. In addition, consortium member GEWI demonstrated its TIC Editor application, which will be used to generate TMC messages.

On the last two days of the event, a group representing European TMC location coding experts met with Beijing road network specialists at the offices of the Beijing Transport Research Centre. The DYNASTY Location Table Working Group made a selection of key traffic locations for a planned project demonstration.

Later in 2005, a group of Chinese experts will visit Europe to learn more about how TMC has developed in the European context. In December 2005, a large demonstration event in Beijing will showcase supported by live TMC info in-vehicle dynamic navigation to a number of key Chinese actors.

Published in ITS International