The major objective is to implement and operate the TMC technology in Beijing and present this as a solution to China’s traffic information system. The demonstration displayed the entire service chain and its implementation in China, and it included:

The showcase was to let the Beijing stakeholders to understand the theory, practice, and benefits of TMC traffic information, and to understand the requirement for such a setup. The industry is expected to exhibit their expertise, and to improve their understanding of the Chinese market and its current technical situation. DYNASTY is expected to be the starting point to create potential new business relationships and partnerships in the EU and Chinese market.

ERTICO is a private-public partnership working to facilitate the safe, secure, clean, efficient, and comfortable mobility of people and goods in Europe through the widespread deployment of ITS and services. It provides a platform for its partners to define common research and development needs at the EU level in order to bring ITS to the market. It also manages publicly funded research and development projects on behalf of the partners, formulates the necessary European framework conditions for the deployment of ITS, and enhances the awareness of ITS benefits among decision makers and opinion leaders.

ERTICO has grown from its original 15 founders in 1991, to its current 100 partners, which can be grouped into five main categories: industry, public authorities, infrastructure, users, and others. It covers companies such as BMW Group, Denso Europe, IBM, NavTeq, Nokia, Robert Bosch, Siemens AG, Thales, Telecom Italia, Portuguese Road Administration, and Swiss Federal Roads Office. ERTICO’s success is largely contributed by its partners that cooperate in advancing the development and implementation of ITS.

As a project coordinator in DYNASTY, ERTICO’s role was to provide strategic guidance and ensure that all participants in the project effectively carried out their tasks and responsibilities.

Figure 1 lists all the partners involved in this demonstration for the intelligent transportation system market in 2005. 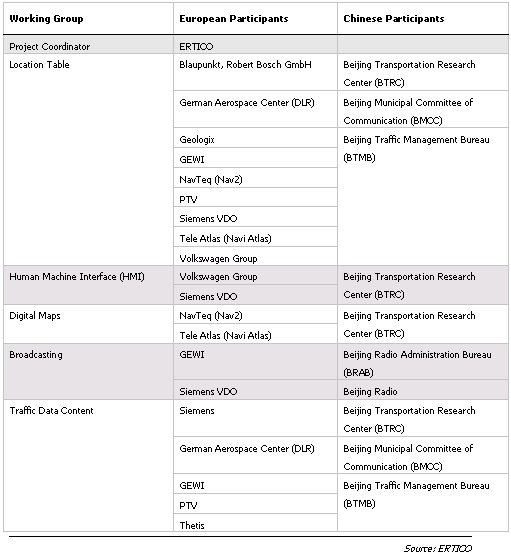 The DYNASTY demonstration in Beijing headquartered at the Traders Hotel on Jianguomenwai Avenue, covered the inner city area to the fourth ring road. It presented an implementation of the TMC service chain, which started with data captured by taxi probes, through message generation, TMC encoding, broadcasting through FM RDS broadcast, and in-vehicle receipt to decode and use by on-board navigation devices and PDA.

High accuracy and detailed digital map is very important in TMC. Nav2, which is a joint venture of North American NavTeq and Beijing NavInfo, and NaviAtlas the joint venture of TeleAtlas in Europe and SIS Shanghai supported digital map used in the DYNASTY demonstration. The digital map used was of international standards, which links the road information to necessary road attributes such as turning behavior, road name, speed limit, and others. The 236 location points chosen by a team of European TMC experts working with local road and traffic experts were integrated into the demonstration and the digital map. Volkswagen group provided six vehicles equipped with a Bosch Blaupunkt on-board navigation device based on the NaviAtlas digital map and a PDA navigation solution provided by PTV and Nav2. The necessary TMC receivers were supplied along with the hardware.

Successful TMC also relies on reliable traffic information, and there are several different ways of collecting real-time data, such as the probe vehicles used in DYNASTY. More than 2,400 taxis of the Beijing Municipal Traffic Information Center (BMTIC) were equipped with telematics unit incorporated with GPS receivers for positioning and GSM/GPRS communication devices for data transmission from the vehicles to the service center. Each car sent its location to the DYNASTY demonstration center via GPS as frequently as once per minute. These locations were used to identify any traffic congestions or incidents, and were automatically encoded using a standardized code description and transferred to the FCD server.

In addition, information on other events such as road accident descriptions and weather descriptions were manually collected from local radio broadcasts. The event messages were then transformed into a TMC message using the TIC client software of GEWI, a software developer of off-the-shelf traffic condition and incident reporting software for both government and corporate customers.

Traffic message from the FCD server and event message from the TIC client were transformed to ready-to-broadcast TMC message using the TIC server software. The TMC message was broadcasted by the RDS encoder hardware. FM RDS radio was the transport media. During the demonstration, both the RDS encoder and the TIC server were installed at the China Central Television (CCTV) tower of Beijing to provide a live demonstration of the whole service chain.

Chart 1 demonstrates the DYNASTY demonstration flow for the intelligent transportation system market in 2005. 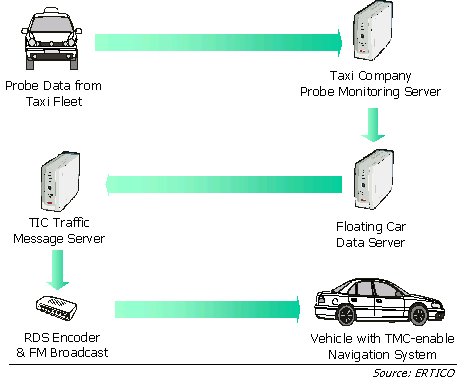 Once the traffic message was broadcasted, the TMC receiver and decoding software in the navigation systems interpreted the message and updated the drivers about on-road conditions, supporting dynamic navigation avoiding congested roads.

Besides the explanation of TMC technology by world-famous TMC Coordinator James Burgess, a series of technical meetings were also organized to discuss the technology and the ongoing development.

The Outcomes and the Future

This demonstration was a huge success to let the Chinese community understand the process of TMC. This will enable the Chinese Government to have a clearer picture and enable it to make a better decision as to which dynamic ITS system to choose.

If you are interested in knowing more about this demonstration, you are welcome to contact ERTICO or Frost & Sullivan, Shanghai office.