15 Oct 2007 Written by Jim
Implementation of the 511 traveller information system in the State of Florida has at times been both complicated and contradictory. The Florida Department of Transportation contains seven different district offices, each effectively its own entity with its own procurement processes and standards, plus a turnpike authority which sits across several of these.

At least in part as a result of this, the state-wide 511 system which was launched at the end of 2005 is somewhat limited. It offers only high-level (major highways) incident information and no information on congestion or construction. Since April this year, however, 511 users in Florida have been able to go through the state-wide system to access information of much greater detail for Southwest Florida (Florida DOT’s (FDOT’s) District One). This new service covers about 30 major roadways in Charlotte, Lee and Collier counties, including the Port Charlotte, Fort Myers and Naples metro areas.

To provide the improved facility, FDOT, via consultants PBS&J, is using TIC, a flexible system with a wide range of traffic and travel information and management capabilities. TIC is configured in this case as an advanced traveller information system and is available from the German software specialist GEWI. PBS&J and GEWI in turn are looking to use Southwest Florida as a reference site to showcase the advanced capabilities of TIC with an eye on achieving significant implementations elsewhere in the US.

Developments in District One

PBS&J first looked at GEWI’s TIC system for use in Southwest Florida just over two years ago. It is a commercial off-the-shelf (COTS) system which is already used in over 60 live projects in North America, Europe and Asia.

Eli Sherer, Project Manager for PBS&J, says that its selection was down to the ability of TIC to harmonise information in all manner of formats – the Data Fusion System’s primary function is to combine data from multiple sources, both automated and manually entered, into one harmonised stream in order to provide a truer picture of the state of travel to multiple outputs. In Florida, it then distributes the combined information to the new regional branch of the state-wide 511 IVR (Interactive Voice Response) system and website (www.southwestflorida511.com).

“TIC,” Sherer continues, “can also distribute streams in a variety of different standards-based ways to the Web or to pagers and PDAs; and TMC location references enable in-vehicle navigation systems to use the traffic information provided in real time. It’s a cost-effective, proven and scalable system that can be user-configured.” 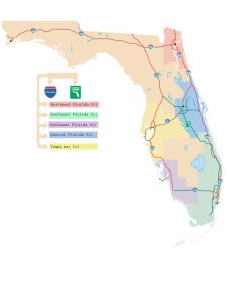 The new Southwest Florida 511 service is part of a layered system which includes regional systems that feature more detailed information. The map shows the regional systems.

Only a few months into initial use, pick-up of the systems has been very smooth, says Sherer. “Operators have a TIC screen and can access and add information in a number of different ways. There are drop-down menus or they can also choose to place icons on a graphical map. They scribe using standard phrases already recorded for the state-wide 511 IVR, so what 511 callers hear is in the same voice and format as the rest of Florida.

“The simplicity of use of TIC can improve operators’ data entry consistency, which is especially important when there are a number of incidents occurring at the same time, such as during peak travel times or emergencies.

“The geographical focus is on Lee, Charlotte and Collier because in the state-wide system if you ask for information on Southwest Florida all that is available is information on I-75. Users who ask for the Southwest Florida branch, meanwhile, are transferred to a menu which details around 30 major roads in the area.” (See Sidebar, Detailed coverage.)

The really clever bit, he notes, is how the messages for the end user are automatically selected using highly configurable filters.

“If for example a user dials 511 and asks for Fort Myers, he or she gets information for the whole of the local area, not just that defined by political boundaries. If it’s relevant, even information from the next town over will be provided.

“TIC allows us to flexibly define areas of interest which are intuitive to drivers. It provides the ability to accurately select data for those areas of interest so drivers hear about problems for locations they expect or ‘believe’ to be in their area without being limited by geographic boundaries.”

“TIC also allows us to filter a user’s request using dynamic location referencing, so again if a user asks for a particular exit on I-75, for example, he or she will not just be given information on a fixed, pre-determined segment of the roadway, but for a dynamic distance in either direction from the location named.”

It is the ease with which such areas can be defined in TIC which is the differentiator, according to Sherer. The system can, for instance, be configured to provide real-time information to users out to 10 miles either side of a requested location. Where the next intersection is, say, 20 miles out, graphics-based tools – so-called ‘filter wizards’ – can be used to quickly and simply extend coverage.

TIC can also collect data supplied by automated sensors, something which is expected to be operational in Florida by early autumn 2007. TIC can automatically create events from travel times. TIC can then identify related events and let operators merge the automatically created events with incident reports and other details, thereby increasing the value of the information for drivers.

Another factor with such a detailed application is the widely varying levels of local knowledge that users can exhibit. For the IVR-based 511 service, therefore, a solution has been to have the system refer to FDOT-designated “intersections of significance”. Callers might be told, for example, that an accident has occurred two miles north of intersection ‘X’, which is a major intersection along the roadway; this gets round the confusion for some users of using local street names or landmarks for reference.

On I-75, the Interstate which traverses the entire Southwest Florida system, operators will soon also be able to look at the travel time data from automated speed sensors collected by TIC and use these as a tool with which to alert emergency responders, as well as augment their own manual input; Sherer describes this as “quasi-incident response operator-driven by cues”. Perceivably, he adds, there is potential for tie-ins with police and other emergency responders’ systems.

Going forward, PBS&J and GEWI currently have one other joint proposal in the offing in the US. Again, says Sherer, this focuses especially on the system’s ability to easily collect information automatically from multiple data streams, as well as provide a manual entry and editing tool. TIC, he says, manages to get round many of the historical impediments to making different systems work together.

“It’s not uncommon to have a DOT using one type of system and the local law enforcement agencies using another. Getting the two – or three, or however many – to interoperate has long been a problem. Data fusion is the key.

“Go back five years, and 511 deployers were saying ‘We need some way of getting our hands around the data’. Now, though, you can have that data passing from multiple sources, being fused to a common format and passing to multiple sources again.”