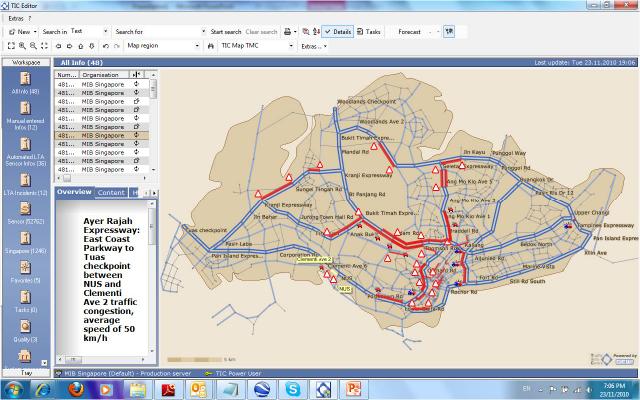 Drivers in Singapore were not slow to realise the potential benefits of an electronic co-driver guiding them to their destination. A wide variety of navigation devices are now available including applications for smart phones.

Navigation is only part of the story; drivers also need to be informed of traffic problems along their chosen route. This is where GEWI Asia Pacific, a subsidiary of German company GEWI Europe GmbH & Co. KG, comes to the rescue providing real time traffic information directly to navigation devices and smart phones using data broadcasting over mobile internet and Fm radio channels. GEWI uses RDS-TMC (Radio Data Service Traffic Message Channel) to broadcast a constant stream of information which is received by the navigation device allowing the system to offer alternative routes based on the current traffic situation.

GEWI, the world’s leading traffic information software provider is also the creator of the location tables used in the Singapore maps from two of the world’s leading map providers, TeleAtlas and Navteq and selected by TelMap for its SingTel Xplorer product. The GEWI location table for Singapore is already version 2 and will be updated and re-certified again early next year. Charles Lim, Director of GEWI Asia Pacific said, “With Singapore’s constantly changing road network it is essential to keep the information for our traffic services up to date”.

GEWI’s traffic service has been on the air since 2006 and is fully tested and approved by many device manufacturers. The service was launched and tested on selected Nokia handsets by SingTel for the 2009 Singapore Grand Prix. Mr Lim said, “reliable real time traffic information is essential for today’s driver in Singapore, a navigation device without traffic is like a car without wheels”.
TIC Smart Client Remote
GEWI Traffic Technologies Tour - North America
GEWI News
GEWI Traffic Technologies Tour – North America
Singapore: GEWI powers traffic info for Nokia, Garmin and others