05 Jul 2011 Written by Jim
German developer of traffic and travel information software, GEWI, has announced that it will be demonstrating its new Local Hazard Warnings (LHW) system at the World Congress on ITS in Orlando, Florida, USA, in October. LHW is a subset of the TEC (Traffic Event Compact) application contained within TPEG (Transport Protocol Experts Group), providing messages for event-oriented messages on road traffic. LHW and TEC are based on the same specification, but LHW is restricted exclusively to information about dangerous situations, such as when safety-critical incidents require increased driver attention.

Next-generation navigation devices using the TPEG protocol have the ability to deliver a much richer dataset to drivers, which should result in a safer driving experience. GEWI North America’s Jim O’Neill has recently presented a paper to ITS Canada’s Annual Conference and General Meeting, which detailed how connected vehicles can improve road safety by alerting drivers of Local Hazard Warnings (LHW). This is achieved using the TEC application within TPEG, used by the next generation of navigation devices. LHW is just one of many benefits provided to the drivers in TPEG-connected vehicles. Others include traffic flow and prediction, parking, traffic events, weather and more, as TPEG is an extendible protocol. Drivers could be made aware of many real-time events, such as where roads have been cleared of snow. 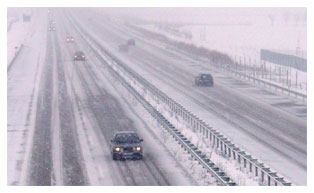 GEWI is currently involved in a LHW project with BMW in Hessen, Germany, which will be offered as a commercial service in 2012. The company develops off-the-shelf traffic and travel information software for both government and corporate clients in more than 125 projects worldwide. This travel information software was originally developed for Traffic Information Centers (TIC), which can be used in the entire traffic information service chain, from data collection and processing to distribution and broadcasting.

It can be configured to perform many applications including DOT traveler information services, workzones and road conditions, traffic flows from GPS and sensors, traffic and travel events, public transport, navigation and connected services, and mobile devices, radio and TV. TIC’s modular software architecture helps organizations to quickly and cost-effectively establish their own systems for a variety of scalable commercial or publicly funded models.