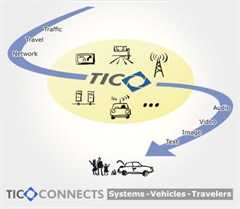 The 2012 ITS World Congress marks GEWI’s 20th anniversary of keeping travellers informed worldwide, and the company will be exhibiting how its TIC Connects systems, vehicles, and travellers together.

TIC has been used in live traffic information systems since 1997, and is used worldwide by many types of organisations including government agencies, police, DoT’s, commercial RDS-TMC and TPEG service providers, automobile clubs, road operators, radio stations and car and device navigation manufacturers.

Recently, Gewi added the ability to distribute traffic data and images on the latest high-tech VMS signs which can show images as well as text. Visitors to the company’s stand will be able to see how this is achieved, as well as learn more about the many advanced features of TIC3 including mobile traffic data entry using the iPad.

Published in ITS International
GEWI’s software aids Austrian winter road reporting
Traffic information is being processed all over the world using software from Bernburg
GEWI in the News
September 4, 2012 – GEWI’s 20th Anniversary
ITS World Congress Issue