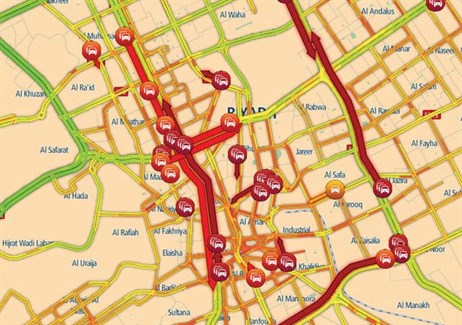 With five years of traffic disruption ahead and an inadequate traffic monitoring system, the authorities in Riyadh needed a solution – and quickly.

In preparation for embarking on what is currently the world’s largest metro construction project, the Arriyadh Development Authority (ADA) in Riyadh needed to put in place measures to minimise the additional congestion and travel delays the five-year project would inevitably cause.

With traffic congestion already a significant challenge in Riyadh, the metro will be an additional and much-needed mobility option for the growing city’s 5.7 million inhabitants. But temporary, ever-changing disruption is inevitable during the five-year construction phase which will create challenges for drivers.

However, with the start of construction only a matter of months away, there was only very limited access to any real-time traffic data and no easy way to communicate road closures, detours and traffic jams to drivers and the public. Even where data was available, there was no platform for analysing the effects of road network changes on delays – a critical factor considering multiple temporary road closures planned during the metro’s construction.

In the time available ADA needed to commission a vehicle-based traffic information and management system capable of providing continually updated information to the public about road closures and detours. In addition, the authority needed a moderation portal to enable it to directly update the real-time information in the event of crashes or incidents and a data archive was required to enable ADA to analyse and report road system performance. 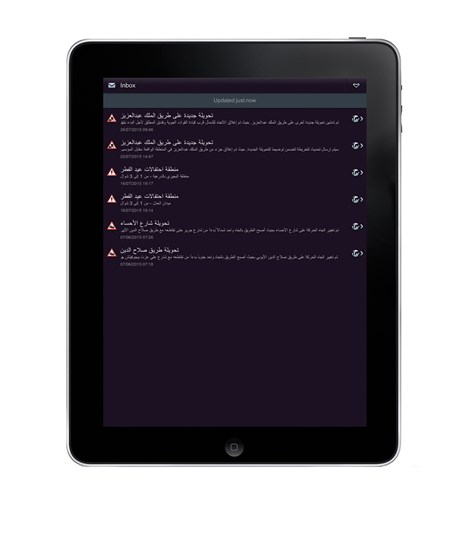 Such a system would require a high-quality, real-time traffic information system with more coverage and higher resolution than the existing sources could provide, as well as the ability for regular updates of the base map to cope with the road closures.

To get information about real-time traffic conditions, road closures, detours and incidents to the travelling public, it was decided to use a smartphone navigation app that included the map.

To achieve this ADA worked with TomTom, local navigation, GIS, telematics and ITS specialist THTC, Gewi and app creator Mireo to implement a system to inform drivers of current conditions and help them navigate through the constantly changing road network. With a focus on the traveller, the new traffic system crowd-sources real-time traffic conditions and then provides that information to drivers and travellers.

Using a tailored version of its satellite navigation technology, TomTom was able to assist ADA in creating a driver-based traffic information and management ecosystem based on probe technology. The system derives much of its information from the smartphone feedback from users who have downloaded the ADA branded free-use smartphone app designed by Mireo. This information is processed by TomTom’s data fusion and distribution platform which calculates the aggregate speed information for any stretch of road for which there is probe data. The real-time traffic information is updated every 30 seconds and is, along with the road closures and construction warnings, sent to the navigation app.

According to TomTom, the crowd-sourced information can be more accurate, complete (in terms of coverage and details) and reliable than data collected with traditional methods such as loops, and can be implemented much faster than a roadside detection system. The key to success is achieving a critical mass of users and in this case the free use of the app was a major benefit, with 400,000 downloading it in the first two months.

Once the probe-based system is implemented, maintenance costs are minimal and the system can grow and adapt as in-vehicle technology and the driving environment change. This means that while the app will continue to develop, it is technically possible to include in-vehicle and telematics systems in the future. 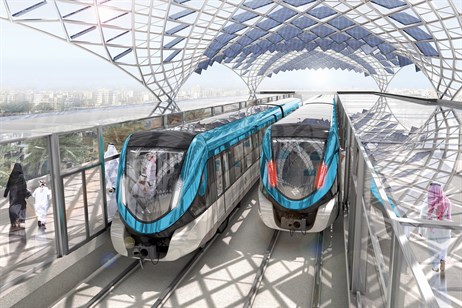 As a result, the city’s drivers get up to date information to guide them around road closures, traffic jams and construction areas to help minimise the impact of the metro project on traffic congestion. Ultimately, it would be possible to make all vehicles driving in Arriyadh ‘connected vehicles’, able to receive up-to-date information about driving conditions and automatically provide real-time feedback on conditions.

Crashes and incidents aside, the mapping is updated about every two weeks as new roads are closed, diversions put in place and closed roads reopened. When this happens all app users are alerted to the update and the app also links to ADA’s messages and websites that report short-term closures, detours and a calendar of planned traffic routing changes.

Not only does the app allow users to view the real-time traffic information showing current delays, the dynamic rerouting accommodates the ebb and flow of congestion. Drivers entering their destination into the app will automatically be routed around the current road closures and congestion and the dynamic rerouting will accommodate any reported crashes and incidents.

Traffic Stats also enables ADA to regularly extract data and analyse how traffic speeds and congestion change over time, either in response to new road closures and detours or to traffic management actions. The system allows the authority to extract processed, archived speed and travel time measurements for analysis and performance reporting purposes. 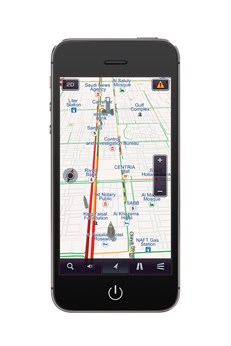 A lack of pre-start baseline data prevents meaningful evaluation of the system’s effect on minimising traffic delays due to the construction of the Metro. However, with the initial release of the app and the 400,000 downloads, the probe data collected and archived has grown manifold compared to that previously available. Approximately every two weeks the app receives map updates with new road closures and detours which now include a lists of key closures, detours and traffic delays allowing the user to click to display their locations.

The quality and coverage of the real-time traffic created and provided to the public has significantly increased and the image top left shows network speeds and traffic jams during a typical congested time of day in Riyadh.

To maintain the coverage and quality of the traffic information, and to communicate closures and conditions to drivers, map updates and additional promotion of the app will continue throughout the five-year project.

The next steps in the project will focus on adding more types of accident and incident reports to the real-time information provided to drivers. This will be done using the traffic management interface and will involve different authorities in Riyadh.