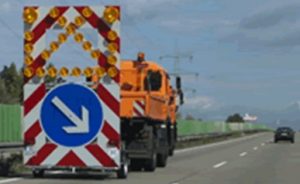 “Improving road safety and significantly reducing the number of accidents is one of our core concerns,” the minister said. The objective of the provincial government, which is also anchored in the road safety concept, is “Vision Zero”. “By 2020, we want to reduce the number of road deaths by 40 percent and those of the seriously injured by 20 percent compared to the figures for 2010,” he added. To use the vehicles of the road depot as a warning signal, is the next step.

The warning message is generated by the Work Zone equipment, which can be an arrow trailer, crash truck, or other device.

Planned stationary construction sites of the state road authority are collected in the same system as well, so that the driver is informed about all interferences at any time.

The location and status is collected by GEWI’s TIC Software which distributes information via RDS/TMC (Radio Data System/Traffic message Channel) to the car radios and navigation systems of all road users on the corresponding motorway segment.Motorists will be informed of the location of the Work Zone whether for securing accident locations, for mowing work, or other activities along the motorways. By providing advanced notification of these activities, driver awareness is heightened. This will result in fewer incident due to increased driver awareness of upcoming Work Zones or other events on and along the roadway.

GEWI will be exhibiting this technology at various Intelligent Transportation System (ITS) conferences this year including ITS America in Detroit, Michigan, ITS Canada in Niagra Falls, Canada and ITS World Congress in Copenhagen, Denmark.