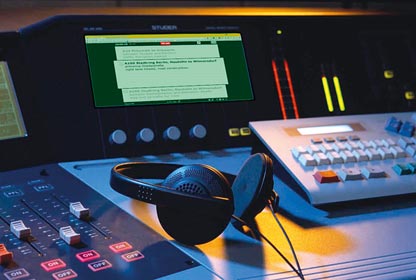 Solution for broadcast traffic announcers
Drivers worldwide rely on radio traffic news reports to alert them about traffic and travel conditions before and during their travel.

Consistently inform and alert travelers
The same data can be immediately distributed to different systems used to inform or alert drivers, helping to avoid conflicting information in websites, news reports, and navigation systems.

No training required
The TIC newsreader application is so easy to use on a browser, no training is required to start selecting, reading, and scrolling news items.

Alert drivers of danger
TIC can ​be used to immediately alert drivers about an on-coming vehicle driving the wrong way on the road.

TIC can set priorities to alert traffic announcers to immediately interrupt a program, and can sent a high priority flagged alert to all other systems, such as for navigation and mobile devices.

Read timed and formatted news
Radio station announcers can use the TIC newsreader application or an Interner browser connected to a TIC system, to read scripted, formatted, selected, timed, and scrolled traffic news reports, either for on-air or for pre-record announcements.

​Announcer teams
TIC can be configured to simultaneously support announcers and teams across multiple stations or programs, for example to share the work load or working shifts.

News reports can be published and exchanged with other stations, programs, and agencies using stanard news report formats including IPTC and NewsML (XML).

Accurate data entry
TIC operators can be prompted to review the data they entered by TIC checking data accuracy, such as missing information, acceptable values, and data formats.

Work productively with proven solution
TIC is a proven solution used by hundreds of operators worldwide for rapid data entry while supporting information accuracy and quality.

TIC can save operator time and workload with predefined templates, auto-complete data entry, and reminding of next steps, tasks, and activities, and reusing data to avoid data re-entry. 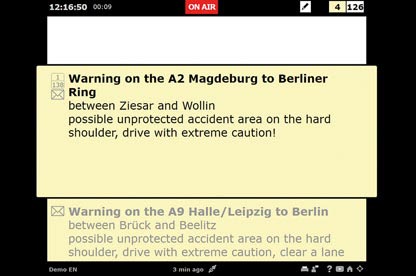 Import and reuse existing data
During system implementation, TIC can import existing data, helping to save time by reusing data and avoiding to manually re-create data.

Verify information
TIC can be easily used to verify and confirm information, by operators who are automatically presented with related local information, such as local camera images and other activities, and by system monitoring processes which can automatically detect conflicts in the same location or at the same time.

Easily share and exchange information
Data can be shared and exchanged with other systems, for example using the documented TIC XML format, or converted for use with other standard and custom formats.

Work everywhere
TIC can be conveniently used everywhere, such as operations center computers, at remote locations using an internet browser, and even while mobile on the road.​

Commercial Off-the-Shelf (COTS) product
TIC is a COTS product which provides higher reliability at lower total cost and risk over several years when compared to build-your-own solutions or clones (one-time copies of other systems).

A TIC system is implemented simply by configuring the TIC product to meet a customer's requirements.

Solutions for real customer needs
GEWI solutions are based on customer requests received worldwide across a wide variety of organizations.

Each request is analyzed and processed, and could lead to a change in the TIC product, system configuration, services provided, or sales agreements.

Customers systems can include the standard TIC user feedback feature used to create accurate and detailed requests, for example automatic screenshots ready to be analyzed.

By continuing to browse the site you are agreeing to our use of cookies.